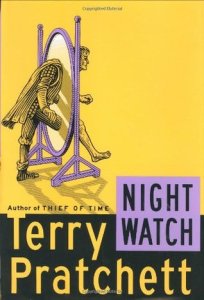 In one timeline, I read this in 2015 and it was a total miss even though I had an affection for the character of Sam Vines. It quite possibly had to do with an attempt I was making to understand Pratchett and appreciate him as much as his fans do by reading the series in order.

In another timeline, 2021 to be exact, I started re-reading with an enthusiastic book buddy, trading off a hyper-Pratchett-esque indy book that was exhausting me with Three Stooges antics and fourth wall-breaking asides.

In the second timeline, a mere six chronological years, one pandemic, and approximately four hundred emotional decades later, I realized what a lovely–yes, you read that right, I called Pratchett ‘lovely’–meditation on aging, responsibility, consequences, and history this was. It is very much a swan song of a book, an ode to prior characters who often make brief but important appearances, whether in their young or aged selves. It is a book that will no doubt land better with the aged reader who can viscerally feel Vimes’ perspective:

“You’re not me, he thought. I don’t think I was ever as young as you. If you’re going to be me, it’s going to take a lot of work. Thirty damn years of being hammered on the anvil of life, you poor bastard. You’ve got it all to come.”

I realized as I was reading Pratchett that my earlier book was so focused on being funny that it failed to contrast or highlight with an emotional counter-point. Here, Pratchett has the occasional extreme such as farcical bragging or ridiculous incompetence, but also contains all these other emotional notes and sad histories.

Surprisingly, there’s also quite a bit about political unrest and revolutions, particularly unsettling in its accuracy to a tumultuous 2020.

“No. The *protest* was over the price of bread, said Vimes’s inner voice. The riot was what happens when you have panicking people trapped between idiots on horseback and other idiots shouting “yeah, right!” and trying to push forward, and the whole thing in the charge of a fool advised by a maniac with a steel rule.”

Bringing to mind all the protests of 2020.

“People said things like “Quite possibly we shall never know the truth” which meant, in Vimes’s personal lexicon, “I know, or think I know what the truth is, and hope like hell it doesn’t come out, because things are all smoothed over now.”

Bringing to mind the lack of accountability post insurrection.

But the most insightful commentary on politics was yet to come:

“Vimes had spent his life on the streets and had met decent men, and fools, and people who’d steal a penny from a blind beggar, and people who performed silent miracles or desperate crimes every day behind the grubby windows of little houses, but he’d never met The People.

People on the side of The People always ended up disappointed, in any case. They found that The People tended not to be grateful or appreciative or forward-thinking or obedient. The People tended to be small-minded and conservative and not very clever and were even distrustful of cleverness. And so, the children of the revolution were faced with the age-old problem: it wasn’t that you had the wrong kind of government, which was obvious, but that you had the wrong kind of people.

As soon as you saw people as things to be measured, they didn’t measure up.”

If that doesn’t say something about all groups, than you didn’t read it very well.

A quite excellent, if occasionally melancholic re-read, at least from the 2021 timeline perspective. May we all return to the timeline where there’s someone we love (but I’ll pass on the baby).

Many, many thanks to Nataliya, her enthusiasm and her insights!