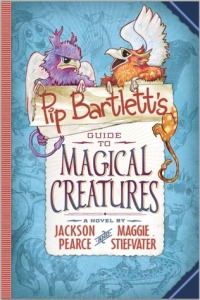 In kindergarten, I wanted to be a veternarian. So I have some empathy for Pip, the main character in a series by Pearce and Stiefvater, who is fascinated by all creatures magical, especially because her unique–and unfortunately for her, unbeliveable–talent of being able to talk to magical creatures. In order to help her identify and memorize the wide variety of magical species, she carries a copy of the mostly-useful  Guide to Magical Creatures by Jeffrey Higgleston. Since Higgleston couldn’t talk to unicorns, her first encounter with a herd of them goes disasterously awry (“I hadn’t ever realized that show Unicorns were really show-off Unicorns”).

After that, she’s sent to visit her aunt in Cloverton. Since her aunt is a veterinarian for magical creatures, it isn’t exactly a punishment. It’s not all about the animals, however, when she’s expected to make friends with Tomas, a youngster who seems to have a lot of allergies, along with an anxiety disorder:

“Everything is too dangerous. All my brothers get to play football, and go to camp, and eat dairy products. I never get to do anything.”

But before you know it, Pip and Tomas are out in the dangerous world, motivated to overcome their fears (and allergies) in order to save some magical creatures.

Pip has an entertaining voice that’s mostly matter-of-fact but somehow still captures the sense of the absurd:

“We learned pretty early in the school year that life was easier if you were as orderly as possible, so we lined up as straight as his eyebrows.”

Every time a new creature is introduced into the text, there’s an illustration with notes, as if taken from Higgleston’s book. Too bad it is in black and white! But the story has a fun voice, nice characterization, a good message and an excellent amount of unique creatures. I definitely would have loved as a youth. As a grown-up, it was a pleasant, entertaining read. Except those unicorns. What a bunch of jerks.

Epilogue: Like Tomas, I suffered from profound allergies, although with not nearly as cute as manifestation as he has. So I switched to people, who are surprisingly a lot more like unicorns than I would have expected.